"Darwin vs. God" - and BBC History

The latest issue of BBC History has an illuminating article on Darwin vs. God, "exploding the myth of the clash between church and science". 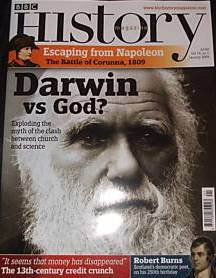 This is really an occasion to congratulate, celebrate and dance in the streets. Before shouting from the rooftops.

Not the least as the Historian of Science John van Wyhe shows how easy it is to be trapped by myths which seem impossible to counter by mere facts.

"We often hear that when the Origin of Species was published there was a great outcry and an historic clash of science and religion.

This is probably more fantasy than fact. Such stories can now be told and repeated only because we have forgotten just what was, and what was not, shocking in 1859".

Still, once again the left hand doesn't know what the right does, something that as far as known has no evolutionary benefit. If there is anyone keeping by the myths, it is BBC itself. In an overview of historic figures we read that

Darwin was vehemently attacked, particularly by the Church.

The matter is not directly improved by van Wyhes article so far not being published on the net. Just to ensure that the myths will stay as safe as ever.

In a Darwin Jubilee Year, not to mention a neoatheistic age, it would anyhow take a miracle to move them.
Lagt inn av Bjørn Are kl. 21:41 1 kommentar: