How embarrasing can it get?

Well, here is an attempt.

And it is not the video I am talking about. That one is really great.
Lagt inn av Bjørn Are kl. 22:50 Ingen kommentarer:

If there is another band I love to mention, it is definitely Phil Shulman's.

So here is a highly recommened podcast interview with one of the founders of Gentle Giant.

Please don't counterpoint too much out of this blog.
Lagt inn av Bjørn Are kl. 22:11 Ingen kommentarer:

As expected, the ridiculous Religulous is rather smack full of dumb distortions, not to mention delusions. In short dysfunctionally dim.

Read more about it in these comments.

Even if not every single adjective starts with a D.
Lagt inn av Bjørn Are kl. 19:52 Ingen kommentarer:

Time for a name

As technobabble go, babbling about synths are more interesting than most.

How do you feel about the prototype Polymoog that you have?

Well, I don’t really like it that much. I don’t use it anymore. You know, I helped design that. I spent about a week with Dave Luce in the studio. While I was there I was saying, "It’s good, but it could be better if you did this and this, and added this to it." So he made some notes and then went back to Buffalo and had the second prototype made up. When I went to Buffalo, I tried it again. All the bumps were out and I said, “Well, it could be good if you had the knobs in this position." So he made some more notes, followed those ideas through, and the next thing I’m expecting is to see the end result. You’d think that after working on the instrument I’d get to see it. But the next thing I know, they’ve sent it to Switzerland. I won’t say to
whom. Well, I was a bit upset."

A name in time

Arhaeologists have found a bowl that may have a dedication to Christ, from the last centuries BC or early first century.

In a time when there are people even not believing he existed, such findings are always amusing. Not only as they tend to stir up so much emotion, also just to see how the arguments for what it really is about goes.

And how it is being spinned by media.

So far the best comment may be from Jim West.

There’s so much wrong here. First, the bowl isn’t the earliest reference to Christ. And second, there’s no evidence that the bowl suggests what they are saying it does. And finally, this is yet another example of ‘much ado about nothing’.

“It could very well be a reference to Jesus Christ, in that he was once the primary exponent of white magic,” Goddio, co-founder of the Oxford Center of Maritime Archaeology, said.

Rubbish and pure, unadulterated speculation. Archaeology has been bastardized yet again in service of the absurd. The Discovery Channel has lost all credibility since they of late seem determined to promote the most nonsensical theories.

In short, talk about The Historical Jesus reveals more than most, modern medias strange mix of sensationalism and shallow insight.

"Ntwrong" also does some memorable musings in the comment section.

I’ve seen that bowl somewhere before. It looks very familiar. Ah yes - I’m sure it used to sit on Morton Smith’s desk. It’s where he kept his pencils.

A vote from Time

What is better on a damp autumn day than a vintage report from Time?

As the houselights dimmed in Detroits Cobo Hall last week, the concertmaster signaled for the oboist's A, and the strings and woodwinds went about the squeaky business of tuning up. Then like something out of an old Esther Williams spectacular, Conductor Godfrey Salmon rose 14 feet in the air atop a hydraulic podium. Silence reigned for a good second or two before the cries came from the audience: "Rock 'n' roll!" "Get it on!" "It's boogie time!"

Not quite boogie time. The British rock group Emerson Lake & Palmer had not brought along a full 58-piece symphony orchestra for just another evening of chug-a-chug rock. As Maestro Salmon gave the downbeat, 9,500 fans, many reared on the violent excesses of Alice Cooper and Iggy Pop, got the first sampling of what was in store for them. From 40 huge loudspeaker enclosures suspended from the ceiling came the mighty sounds of Abaddon's Bolero, a work Composer-Pianist Keith Emerson has based on the same Spanish rhythm as the Ravel classic.

After a few bars, a thick curtain of light, produced by in tense lights rimming the stage, dissolved to reveal Keith Emerson, 32, Greg Lake, 29 and Carl Palmer, 27, hard at work on the center. There was Keith darting from Hammond organ to Moog synthesizer, and Greg picking away at his bass-guitar. Between them sat Carl, confined along with his drums, snares, gongs and tubular bells in a percussion cockpit that resembled nothing so much as a mod four-poster converted into a padded cell for the phantom of the opera. The music built relentlessly, awesomely powered by 72,000 watts worth of amplification -enough to start a medium-sized radio station. The volume never reached the threshold of pain (130 decibels), but it was, in Salmon's words, "enough to peel an apple ten feet". 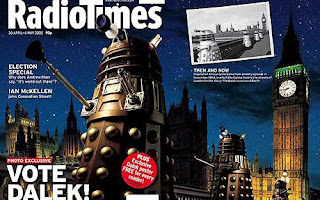 Well deserved, an image of a Dalek in front of the Houses of Parliament has been voted the best British magazine front cover of all time, according to The Telegraph.

Hopefully they will not also run in the US.
Lagt inn av Bjørn Are kl. 10:06 Ingen kommentarer: 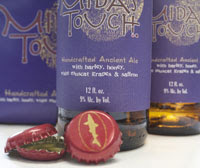 A bit fed up with stale old beer? Then try an even older.

An ancient burial chamber at Gordian in central Turkey supposedly houses the tomb of King Midas. Midas was not only a myth, but an actual king of the ancient kingdom of Phrygia around 700 B.C.E. His intact tomb seems to have been the location of the final funeral party for its permanent resident, and someone neglected to clean the 157 different drinking vessels left behind.

Some of these vessels still had some residue on them. The University of Pennsylvania Museum of Archaeology and Anthropology used some new methods of molecular archaeology and found that the residue was the remnant of an old drink with traces of barley, honey, and grapes; it was seemingly a mixture of beer, mead, and wine. Assuming this wasn't a mixed drink gone wrong, Dogfish Head Brewing did the only thing it knew how—made a beer from it.

And the real one

Prelude to a hope, a piece from the new album.

While we're at it.

Not quite a bummer this one either.
Lagt inn av Bjørn Are kl. 12:48 Ingen kommentarer:

How good can it get? Well, this KE9 3rd is definitely one of the closest.

And a thumb and 13 other digits up for a not especialy lazy Trilogy.

Not to forget this roaring monster.