Where is science fiction going?

Ideas come in many shapes, not to mention forms. Some are even new, also when dealing with the future. Still, it is as hard as ever to make good predictions.

G. K. Chesterton observed this with his usual wit a hundred years ago in The Napoleon of Notting Hill.

The human race, to which so many of my readers belong, has been playing at children's games from the beginning, and will probably do it till the end, which is a nuisance for the few people who grow up. And one of the games to which it is most attached is called "Keep to-morrow dark," and which is also named (by the rustics in Shropshire, I have no doubt) "Cheat the Prophet." The players
listen very carefully and respectfully to all that the clever men have to say about what is to happen in the next generation. The players then wait until all the clever men are dead, and bury them nicely. Then they go and do something else. That is all. For a race of simple tastes, however, it is great fun.

Lovers of science fiction witness this whenever we read or watch the classic stories from the 30's or 50's, not to mention SF TV-series from the 70's and 80's. The brave young captain of the transgalactic space ship in AD 3 000 easily solves engineering problems with his slide rule. The moon landing was described in all possible details in hundres of stories before 1969, and they all got it wrong on perhaps the most important aspect. It was directly televised.

So what is a SF author to do these days? The field may not be quite as fertile in ideas as ten or twenty years ago, still there are great stories being written. However, one idea has caught my attention more that others lately. We are talking about Eric Brown, known for his Helix novel. In a recent interview with Scifi Chick , he reveals one of the more interesting ideas ever:

I’m a big fan of G.K. Chesterton, best known as the creator of the Father Brown detective stories. (I’ve recently sold a novella to PS Publishing featuring Chesterton and Edgar Rice Burroughs meeting on Mars, improbable as that might seem.) 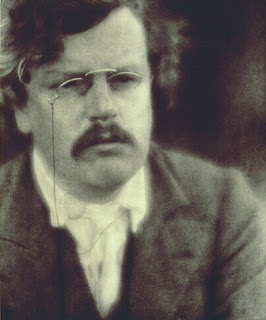 Naturally, as a Chesterton fan, Eric follows the grand tradition of including him in a story. Gaiman and Dickson Carr are far from alone in realising that someone so alive in his writings, perhaps more than any author, deserves to come alive again.

However, the intriguing thing here is matching him with Burroughs, perhaps the most widely read pot boiler ever on late 19th century Romantic values from the Noble White Man (except Russians), Evolutionism and Religion as mostly about Human Sacrifice, to getting as far away from the modern city as possible. The most noble is not just a return to nature, it is a return to the trees. No wonder he was my fav author when I was ten.

Who better then, than Chesterton to make for an ahem... interesting... dialog?

I am not in the habit of playing at children's games and predict which ways science fiction is going. Still, this particular road is one it hopefully will teleport even more.
Lagt inn av Bjørn Are kl. 12:36 Ingen kommentarer: