Vesalius vs. the rib 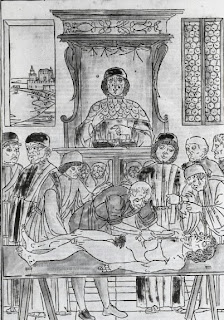 I have for some time looked at the story of the 16th century anatomist Vesalius who allegedly was persecuted for insisting that men did not have one rib fewer that women.

This is ofte connected to the myth that medical science was held back because the church did not allow the dissection of corpses.

In reality dissection was permitted in Medieval Europe - it was other cultures (the Greeks, Romans and Muslims) that forbade it. Galen's authoritative description of anatomy was in stead based on animals anatomy. As did this not quite match human anatomy, doctors long imagined there to be some errors in their own findings (which mostly was done by assistants anyhow), as Galen was too clever to be wrong.

Medical science seems more hold back by a well deserved respect for the genius of Galen, than from any other single factor.

Anyone interested in medieval medicine could do worse than check out Mondino de’ Luzzi (1270-1326) who wrote a textbook on the dissection of corpses. And the illustration above shows a public dissection in the 1300's.

What about Vesalius and the rib?

The story is told like this by the notorious mythmaker A.E. White in his book on the "Warfare" between science and theology:

"Still other enroachments upon the theological view were made by the new school of anatomists, and especially by Vesalius. During the Middle Ages there had been developed various theological doctrines regarding the human body; these were based upon arguments showing what the body, ought to be, and naturally, when anatomical science showed what it is, these doctrines fell. An example of such popular theological reasoning is seen in a widespread belief of the twelfth century, that, during the year in which the cross of Christ was captured by Saladin, children, instead of having thirty or thirty-two teeth as before, had twenty or twenty-two. So, too, in Vesalius's time another doctrine of this sort was dominant: it had long been held that Eve, having been made by the Almighty from a rib taken out of Adam's side, there must be one rib fewer on one side of every man than on the other. This creation of Eve was a favourite subject with sculptors and painters, from Giotto, who carved it upon his beautiful Campanile at Florence, to the illuminators of missals, and even to those who illustrated Bibles and religious books in the first years after the invention of printing; but Vesalius and the anatomists who followed him put an end among thoughtful men to this belief in the missing rib, and in doing this dealt a blow at much else in the sacred theory. Naturally, all these considerations brought the forces of ecclesiasticism against the innovators in anatomy."

The story is given more twists in a page about P. I. Nixon Medical Historical Library's most valuable book:

"Prior to Pope Sixtus IV's decision at the end of the fifteenth century authorizing human dissection for scientific purposes, "to touch with a scalpel the dead 'image of God' was reckoned impious theology." Sixtus' decree opened the stage for experimentation. As professor of anatomy, Vesalius enjoyed an international reputation that drew huge crowds to the lecture halls. Instead of hiring assistants to handle the cadavers, as was customary in his time, Vesalius personally demonstrated all dissections. He was an irrepressible showman, whose classes were as riveting as theatrical productions."

"With characteristic vigor, Vesalius probed into traditionally held beliefs and, like Galileo, engaged in a lifelong struggle against the established authority. In the "Adam's Rib Controversy" Vesalius contested Church doctrine by proving that the male and the female of the species have an equal number of ribs. He also disputed the "indestructible bone" theory, which had stated that after death, human beings are left with one bone from which a new body is formed at the Resurrection. Under pressure from the Catholic Church, Vesalius finally left Italy to become medical advisor to the kings of Spain, Charles V and Philip II, but his spirit was broken."

):"Vesalius also disproved the Galen theory that men had a rib less than women and Aristotle's theory that the heart was the body's centre of mind and emotion believing instead that it was the brain and the nervous system."

At one place we are told that

"Another scientist of the renaissance was Vesalius, who was an expert in dissection. He found hundreds of mistakes in the accepted book on anatomy, written by Galen in the second centuryi Apparently Galen had used animals to develop his human anatomy book, while Vesalius used human cadavers. Vesalius, new book on anatomy was denounced by leading teachers, with one scientist proclaiming that he would rather stick with Galen and be wrong than change and be right!

Vesalius was proclaimed a heretic because he could not find certain bones required by the orthodox religion of his day. None of his cadavers had a missing rib, which Adam had supposedly passed on to all of his male descendants, and the "resurrection bone" could not be located, a legendary bone which was supposed to start the restoration of the body at the resurrection. He also failed to locate the soul in the bodies he examined. Discouraged, he destroyed his notes and wasted the rest of his life, but his early book on anatomy was as revolutionary as the work of Copernicus."

Now, it is in fact true that Vesalius writes about the rib:

"It is commonly believed that men lack a rib on one side, and that men have one rib fewer than women. This is plainly absurd, even if Moses did say in the second chapter of Genesis that Eve was created by God out of Adam's rib. Granted that perhaps Adam's bones, had someone articulated them into a skeleton, might have lacked a rib on one side, it does not necessarily follow on that account that all men are lacking a rib as well. Aristotle attributed only eight ribs to humans, and was ready to allow that certain members of the race of the Turduli were born with only seven ribs on each side, provided he established this on the actual testimony of some suitable authority. But as in the latter instance Aristotle was willing to support his opinion only with the testimony of others, it is also not unlikely that in the former instance he ascribed eight ribs to man on hearsay evidence, and in this manner wrongly handed down to us something he had not seen. For if we discover that he was suppositious so many times concerning the fabric of man, what judgement shall we make about the rest of his research into animals?" (The Humani Corporis Fabrica, Bk. I Chapter 19)

However, what he says is that it is "commonly believed", not that most doctors believed it, or that the church had made some kind of doctrine out of it.

And there is in fact little trace of him being persecuted by the Inquisition or anyone else. The story seems in short rather unsupported.

What then is the real story here?

No doubt it may have been a common belief (among at least uneducated people) that Adam had one rib less. Popular prejudices is hard to avoid. However, I can't find any documentation of the Church or Galen really holding or teaching this. Vesalius's book never even was on the Index of books one should not read.

My tentative conclusion then, is that this is another myth. However, if anyone does know more about this, feel free to dissect my rib case.
Lagt inn av Bjørn Are kl. 13:16 2 kommentarer:

Some news stories are rather more telling than others.

Gary B. Trudeau’s classic comics Doonesbury, has recently had a series about Iraqi Christian refugees. A rather clueless Fox News correspondent covers the story of an Assyrian family who were unable to live longer in Iraq, like so many tens of thousands - or more.

Read a comment about it here, with a few select comic strips.

Trudeau has again managed to find a rather different angle than traditional American news coverage, even if places like Christianity Today have been doing it for years.

Carl against Germany and Turkey

As promised elsewhere, here are Stuart's and mine reports on the Carl Palmer Band playing both Oslo and (incredible enough) elsewhere in Europe a few weeks ago.
Lagt inn av Bjørn Are kl. 12:06 Ingen kommentarer: