Time for a commercial. 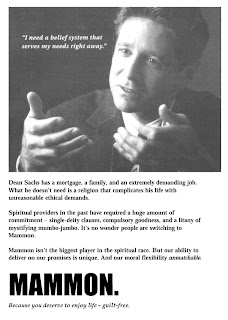 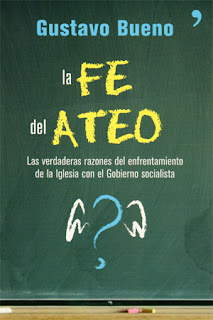 My friend Jose (on Bede's discussion group) has translated some interesting passages from his fellow atheist, the Spanish philosopher Gustavo Bueno. Who sometimes is even more Catholic than the Pope.

"Sometimes 'rationalist' fundamentalism, in the shape of atheism, is presented as the prior, necessary, and even sufficient condition for the advancement of the nations, while religion (in general) is deemed responsible for backwardness and barbarism in human societies. This is purely idealistic naivety, a throwback to the Enlightenment mentality of the 18th century, which not only traditional Christian philosophers have responded to, but also Comte's positivists, Marxists (especially Lenin), and other critical movements such as the Frankfurt School led by Horkheimer and Adorno, wuth their renovated criticism of the Enlightenment.

Tertiary religions in general, and Christianity in particular, cannot be regarded as an irrational antithesis to the development of science and culture, as so many of those who espouse scientific fundamentalism (i.e. atheist 'radical rationalism') would have us believe. On the contrary, tertiary theology, and especially Christian theology has, thoughout its history, built a doctrinal edifice which can be seen as one of the most refined examples (when it comes to cultural development) of propositional science in the Aristotelian sense.

Anyone who is familiar with the Thomistic doctrine of transubstantiation cannot help but admire the refinement and subtlety of the theological theories, which have in turn often paved the way for ulterior philosophical or scientific concepts or ideas, even materialist ones.

We have no alternative but to heap scorn on those who speak, in general, of the 'crudity' of theological reasoning and its backwardness, and who, in their naive adolescent idealism, believe that once religion is removed and atheism established, progress, welfare, peace and happiness will naturally follow."

Jose doesn't quite avoid to mention a certain set of new atheists (or El Nuevo Ateo, I presume) in this connection.

However, as Bueno does not, we will leave it to the reader's imagination.

Robert J. Sanders has an interesting essay on how the Name of God was profaned in the US by linking the Christian faith to a neo-conservative political agenda. Old news in more ways than one, still an interesting angle on the present presidential campaign where the "Christian Right" now fools fewer people than ever.

Sanders looks especially at Pat Robertson, who (to put it mildly) has had some influence on the Christian Right. In his book The New World Order, Robertson presents his program for America and the world.

He begins by painting a picture of a world soon to fall under the power of Satan. According to Robertson, conspiratorial forces, such as the Illuminati, the Masons, the national and international bankers, the United Nations, the liberals, and The Supreme Court are conspiring to create a world order against God. The only hope for the world is for Christians to take control of the U.S. government and impose the Ten Commandments. Unless that happens, there will "never be world peace until God's house and God's people are given their rightful place of leadership at the top of the world.

Viewing the world as a conspiracy is a surefoot way to diaster.

Once the Christian right gains control of the U.S. government, their next step is to "save" the world from the godless one-world government that is waiting in the wings. Here is Robertson,

Such a world government [the Satanic one] can come together only after the Christian United States is out of the way. ... With America still free and at large, Satan's schemes will at best be only partially successful. ... An independent America could point out Satan's lies. If America is free, people everywhere can hope for freedom. And if American goes down, all hope is lost to the rest of the world.

Sanders calls it nothing less than idolatry.

It places Christians on the top, rather than on the bottom as those who serve as Christ served. It makes the un-biblical claim that a Christian United States of America is the divinely anointed, holy nation by which God defeats Satan and saves the world.

And it makes me shiver not a little.

So, how then, what is the best way to evaluate Robertson's theology? Sanders concludes with no surprises. Robertson is even (worse of all, some would say) un-American.

By the norms of orthodoxy, Robertson is a heretic. By Old Testament standards, he is a false prophet, telling the powerful what they want to hear. By the standards of America's founders, his agenda is un-American. It violates the founders' belief that America should not be governed by those who impose their sectarian religious practices upon others.

I have mixed feelings about Sanders' web site and book reviews. Still, one can almost forgive him for finding Harry Potter unsuited for children, when he finds Robertson unsuited for all.