Eugenics and Other Evils

Nobel Laureate James Watson is at the moment a rather non grata persona in many circles. This has led a professor of genetics to attempt a history of eugenics, in The Guardian.

Despite his frantic backtracking, James Watson's statement that Africans are less intelligent than Europeans follows a long and dubious tradition of geneticists claiming that supposed racial differences have a genetic basis. The idea goes back to the birth of the science of evolutionary genetics and its bastard sibling: eugenics.

One not overtly amusing thing about this is the myth (perpetrated by e.g. Dawkins) that it was Evolution and modern DNA-research that proved the equality and value of humans. Racism and religion went hand in hand, until science dispelled both by bringing light on the matter.

In reality, values and equality are religious or at least mystical notions, just as racism may be. However, if evolution and DNA provides the only data available, it is impossible to prove matters like "same value" or "equality".

No humans are really alike, not even twins. Value is all in the eye of the beholder. So it is not surprising to see that the ones traditionally supporting eugenics seem to have been rather progressive people, whether biologists or bishops, with their own various and often well intended agendas to improve society and mankind.

Eugenics societies sprang up at the beginning of the 20th century in most western countries to promote breeding programmes, but the movement was not confined to scientists. Browse through the Eugenics Society's membership list and you find lords, ladies, bishops, academics, writers, doctors, artists and politicians from all sides. In November 1913 the Oxford Union carried a motion approving the principles of eugenics. As a cabinet minister, the young Winston Churchill advocated compulsory sterilisation of "the feeble-minded and insane classes". George Bernard Shaw and HG Wells were profoundly influenced by Darwin. The contraception pioneer Marie Stopes campaigned to pass laws to enable sterilisation of the "hopelessly rotten and racially diseased".

But the writings of literary eugenicists betray their real roots: fear. In 1915 Virginia Woolf wrote in her diary: "On the towpath we met and had to pass a long line of imbeciles. It was perfectly horrible. They should certainly be killed." HG Wells openly advocated the killing of the weak by the strong, insisting that "those swarms of blacks, and brown, and dirty-white, and yellow people ... will have to go".

Despite some goode observations, it is hard to avoid the feeling that the geneticist in Guardian is just as political correct as the eugenists. Not the least as he fails to mention voices that protested against this mania, long before Hitler managed to make eugenics a pariah of postwar science.

Perhaps the foremost was G.K. Chesterton.

Eugenics is a nice-sounding word, combining as it does the Greek words for "good" and "birth." And Francis Galton, who made up the word and the idea, proposed Eugenics "for the betterment of mankind." But that's as far as the nice-sounding stuff goes. The actual definition is rather horrible: the controlled and selective breeding of the human race. Galton based his ideas on the theories of his cousin: Charles Darwin. By the beginning of the 20th century, when Darwin's theory was safely embraced by the scientific establishment, Eugenics was getting 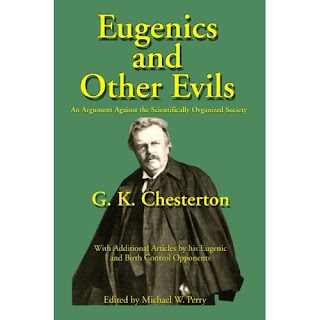 good press. The New York Times gave it constant and positive coverage. Luther Burbank and other scientists promoted Eugenics. George Bernard Shaw said that nothing but a Eugenic religion could save civilization.

Only one writer wrote a book against Eugenics. G.K. Chesterton. Eugenics and Other Evils is one his most prophetic books.

The edition linked to above is heartily recommended. Not just for Chesterton's perceptive ravishing of the logic behind eugenics and the objectives beneath the surface, whether one agrees or not that the movement combined the capitalist desire to maintain cheap labour with the socialist desire to scientifically organize society.

The most thought provoking part is the last. Here eugenicists of the period speaks through a series of authentic articles and letters.