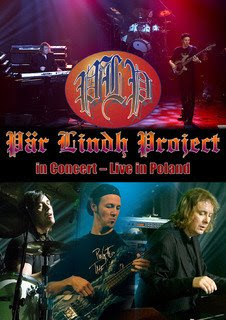 As I have finally been able to sit down and watch Pär Lindh Project's (PLP) latest offering, Live in Poland, the verdict is simply that few lovers of adventurous music (or progressive rock (or neo-baroque as Pär calls it)) will regret doing the same.

This is pure Pär, in a set of great instrumentals with William Kopecky on bass(es), and Svetlan Raket on drums. While he is not as daringly modern in his choice of classical influences as Keith Emerson (and definitely not as wild), he is a head and shoulder or two above most of today's keyboardplayers.

Subtle elegance and carefull electronicity, or in short Rick Wakeman meets Jordan Rudess. Pär mentions in an interview Bach, Beethoven, Mussorgsky & Wagner as the classical composers he finds closest to prog, and it shows in his performance.

It is fun and rather impressive to see how much he enjoys playing Hammond, synths and piano (and moving quickly between them, not to mention the classic Emerson stunt of playing one with each hand while looking straight ahead). Not to mention a good ragtime thrown in for fun. No knives or daggers, though.

While the opening number may be a bit hard to get into (especially if you're not familiar with Mussorgsky), the rest of the show flows along with the neo-baroque flame kept very strongly alive.

There is also an interview with Pär. And a deluxe edition with a CD as well.

Pär's homesite is well worth a look - make sure to check out the interviews (including the stuff about The Nice and Keith).

The old "tell me what you read and I will tell you who you are" (or perhaps more often want to be), is getting ever more risky and relevant with the forces of Facebook.

Joe Queenan hits the nail somewhat on the head with his serious tongue-in-cheek analysis of the perils of public self revelation.

But of all the personal information disclosed on Facebook -- and that includes those exquisitely pretentious quotes about the meaning of life -- it seems to me that the section with the greatest potential to catch up with people down the road is "Favorite Books."

Precisely. And what do people read?

My daughter, who graduated from Harvard in 2006, is constantly drawing my attention to the preferred reading materials of her classmates, ostensibly the future leaders of America. She does this not only because surveying the stratospheric level of post-adolescent glibness is more fun than a barrel of monkeys, or watching the Lakers, but because she believes that American society as a whole has a right to know what lies ahead as the best and the brightest move into leadership roles. By the looks of things, it is not going to be pretty.

The most striking thing about the Favorite Books section is the lack of hesitance to identify less-than-immortal books -- "The Godfather," "The Notebook," "The Da Vinci Code," assorted trash by David Baldacci -- as rave faves. This, coupled with the alarming popularity of the voluble crypto-fascist Ayn Rand, strongly suggests that the Ivies may not be getting the job done, culture-wise, these days.

If not for Ayn Rand it would seem that students almost are like most people. Which is not exactly big news:

I'm not suggesting that young people today are dumber or less sophisticated than their forebears. I am merely saying that because previous generations lacked the technology to make their callowness available for all to see, they have been spared the pain of being ceaselessly reminded of the indiscretions of an intellectually derelict youth.

That is why some of us prefer ceaselessly to remind everyone of the indiscretions of an intellectually derelict middleager, by writing blogs.

Before my daughter went to Harvard, I thought that everyone at the school was a ruthless, Machiavellian schemer who played the game of life like six-dimensional chess, cunningly plotting each move decades in advance. The Favorite Books section of Facebook suggests otherwise. No one whose favorite book is "The Da Vinci Code" is thinking six moves ahead.

It is a rare treat to see the human condition summed up so well in one sentence. Seems like it is not only his daughter who is reading Chesterton.
Lagt inn av Bjørn Are kl. 10:04 2 kommentarer: