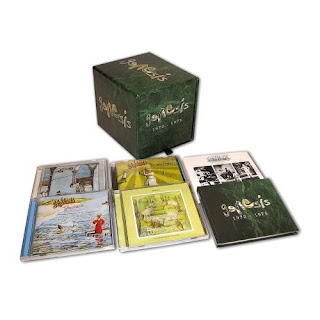 Being more often than not in a religious mood, it is time to take a second look at the early chapters of Genesis.

After having enjoyed them since 1973, and had the pleasure of attending two concerts in the 70's (one of the legendary Lamb performances in 1975 and one from the not quite as legendary And Then There Were Three tour in 1978), it was with poorly hidden excitement that I yesterday opened the new box set comprising the Peter Gabriel Years.

Besides getting the original five albums remastered in several sound formats, the bonus material was almost perfect. It is rare to get so good a mix of CD's and DVD's, of unreleased tracks, interviews and live performances.

Whether it is Gabriel performing like Jagger, great keyboard sounds, not to mention Steve Hackett - or just the visuals (and the Gabriel inbetweeners) - it is a blessing to see the real thing after the Genesis of the 80's and 90's.

The box set has received great reviews all over, even if there are some peculiar (or proverbial) things being said.

What is surprising is to hear Gabriel speak with fondness for The Nice, keyboardist Keith Emerson's first group before moving on to the hugely successful Emerson, Lake and Palmer. There's little denying the confluence of classical influences and Emerson's inimitable style on Genesis keyboardist Tony Banks, and he's always been a fine player; but early on, Genesis differentiated itself from many of its progressive rock cousins by being more about the song and less about the playing.

Well, listening to the albums one doesn't quite get the same impression (except from The Lamb Lies Down on Broadway).

Most pieces are structured around a lot of playing and has a rather loose "song" format, if one by that means verse/chorus/verse/chorus with just a few notes inbetween. Which is not early 70's Genesis at all. There was a fresh and fortunate time when the group was too many notes all over the place.

Genesis was in short not Gary Glitter. While ELP certainly had a lot of pure songs.

The real truth behind such comment seems to stem from the glorious tradition of praising Genesis while slamming their prog peers. With some it looks suspiciously like protesting too much, trying to be credible and cool, and at the same time keeping the cake and enjoying (the horror) prog.

So perhaps it is time to remind critics that other people has shown a lot more understanding, since the very early 70's.

Janis Schacht, Circus, September 1972:
Several months ago, Charisma Records ran a full-page ad with a picture of Keith Emerson and the quote claiming that Genesis were without a doubt one of the finest groups around and that Tony Banks was one of the best organists. There's a definite reason that Keith came out for Genesis. Like all smart politicians he realises that when the barriers are stripped down and the truth is out it pays to be on the winning team.

And the Box Set is a great prize.
Lagt inn av Bjørn Are kl. 19:42 Ingen kommentarer: