Dragons can be created

Sometimes one does not quite know what to say. Or one has so much to say, that is is hard to decide where to start.

British atheists like Dawkins and Hitchens are eager to assure us that while they reject the Judeo-Christian God, they do not reject the values of compassion, human dignity, and equality that were introduced by Christianity and are widely shared in Western society. Dawkins and Hitchens insist that we can be moral without God. But Onfray, like Nietzsche, insists that this is an illusion.

Onfray describes the Dawkins-Hitchens position as "atheist Christianity," which he describes as an attempt to preserve Christian values while eliminating the Christian God. Onfray wants to move beyond this to what he calls "atheistic atheism," which requires the wholesale invention of new values that have never existed before.

What these values will look like, Onfray does not specify. He merely says that utilitarianism and hedonism should be our guides. His startling conclusion is that "atheism is not an end in itself." Rather, atheism exists in order to get rid of Judeo-Christian values that constrict our lifestyle. This is an atheism more honest, more darkly appealing, and ultimately more destructive than that of Dawkins and Hitchens.

Then the question naturally arises, is Onfray more consistent or just more crazy than other New Atheists? I am in a bit of a doubt about what I prefer.

But I am in no doubt that Onfray is into such stuff as dragons are made of.
Lagt inn av Bjørn Are kl. 13:08 Ingen kommentarer:

Dragons can be killed

Unfortunately The Zimbabwean is no fantasy. If nothing else, it is interesting to see how much this letter section shows of both fantasy, fury and faith.

As all may be needed in the present situation, not the least as hope of intervention from the political or humanitarian world outside is nothing to put money on.

Dragons can be killed

Robert Mugabe is in every sense a dragon. Laying waste the land, devouring human lives, demanding the most vulnerable be sacrificed for his appeasement, hoarding treasure he can’t possibly use just so others can’t have it, armoured, intractable, smoking with resentment and rage, and stinking of hubris. Having deified their own power, such contempt have his ruling proxy elitist thugs for the collective wisdom of citizens, they will not be removed by runoffs, regardless of the outcomes. They have no interest in the betterment of Zimbabwe. Rather the prosperity of her people is everything they fear. They cling to power for no other reason than that they may continue to eat the flesh of damsels and babes. Make no mistake—these dragons will continue to savagely brutalize Zimbabweans no less if they win than if they lose.

Let Zimbabweans abandon hoping in the humanitarian intervention of Britain, the USA, or African neighbour nations for deliverance from these dragons.

The dragon Robert and his maggot-spawn can only be removed by a unified appeal to the hosts of heaven: chariots of fire, legions of angels, and the pulling down of strongholds.

Starting this present moment, let every powerless Zimbabwean begin to speak, mutter, and whisper the holy name of Jesus with every breath he or she draws. Just the name of Jesus is itself a complete prayer. The name of Jesus casts down the mighty from their thrones, and exalts the lowly. The name of Jesus routs pride and bondage straight back into the hell from whence it sprang. So let every lowly and powerless soul between the Zambezi and the Limpopo breathe the name Jesus into the air until victory is ours in the heavenly realms.
ED RILLING, by email

From Disc to Deus? 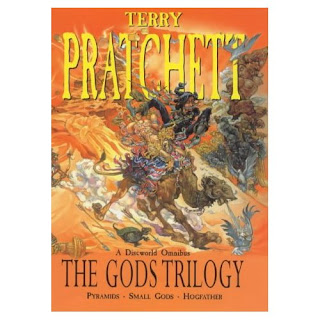 While not quite my fav author, Terry Pratchett undoubtly deserves more acclaim and applause than most.

Not the least his brave fight against Alzheimer, as described in this interview.

After having told the world last December about his condition, he has been struggling to improve. And has discovered the usual silly obstacles which show that also National Health Service has symptoms.

He was genuinely angered, however, to find that he and others of his age are too young to get the Alzheimer’s drug Aricept on the NHS.

“If I ate myself into obesity I could get pills for that for nothing. If I wanted Viagra I could get that for nothing. But I can’t get a drug that gives me that little bit of extra edge. I can afford £90 a month, of course, but there may be someone who can’t in his fifties with early-onset Alzheimer’s with dependants - anything that gives an extra edge must be worth it.”
Last week’s Sunday Times story that patients who paid for their own cancer drugs would be denied NHS treatment enraged him. “In the early days of the NHS, if someone had a bit of spare cash they would hand it over to their doctor and he’d say thank you very much. I cannot see how paying for their own drugs undermines the NHS.”

Feeling that the disease is ignored, he has given more than £500,000 to Alzheimer’s research.

However, his daily life has become somewhat better.

Anger aside, Aricept and/or turmeric seems to be working for him. His condition has improved since December. In the car, he no longer has to keep stabbing away with the seatbelt; he can fasten it in one. Dressing, he’s no longer baffled by his clothes; he just puts them on.

His condition (or perhaps something else) has also led to more intriguing effects.

And here’s a thing: Pratchett may have found God. He says he is an atheist; but after his diagnosis, something happened. At the time, he was busy with all the new demands on his time and feeling that, perhaps, he ought to be writing.

“I’m certainly not a man of faith, but as I was rushing down the stairs one day . . . it was very strange. And I say this reluctantly, because I am trying to deal with this situation in as hardheaded a way as I can. I suddenly knew that everything was okay, that what I was doing was right and I didn’t know why.

Not much to go on really, however experiences always need to be interpreted. And Pratchett seems to believe this has something to do with God. Even if his God is rather detached.

It was his first such experience. Did it make him rethink his lack of faith?

“Faith in what? If I get pushed in this corner, I believe in the same God that Einstein did. Einstein was a clever bloke . . . And it is just possible that once you have got past all the gods that we have created with big beards and many human traits, just beyond all that on the other side of physics, there just may be the ordered structure from which everything flows.

“That is both a kind of philosophy and totally useless - it doesn’t take you anywhere. But it fills a hole.”

So, like Antony Flew, Terry Pratchett may be closing up on God. Or perhaps God on him.

Of course, this will lead to juvenile jokes about belief in God indicating Alzheimer. Lovers of parodic fantasy sometimes are rather more into parody than fantasy. Still, I think most will show proper tact and courtesy.

Rumours are starting and being spread.