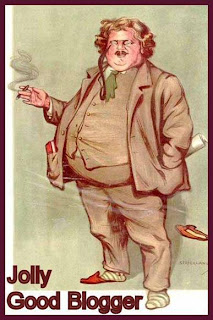 So what did Chesterton write about one hundred years ago?

We begin a weekly tradition of the democracy of the dead, on this blog mainly consisting of quoting from - and paraphrasing - his articles in the Illustrated London News one hundred years ago.

This time about Suffragette Demonstrations.

The incident of the Suffragettes who chained themselves with iron chains to the railings of Downing Street is a good ironical allegory of most modern martyrdom. It generally consists of a man chaining himself and then complaining that he is not free.

GKC is not impressed. He doesn't think it will matter much. For true martyrdom was about something different. To change the world it helps little to make pretences of suffering. Or to use violence, like fighting in the streets or making bombs like the anarchists or modern days terrorists.

You have to suffer, and sing praises while you do,

if men smiled and sang (as they did) while they were being boiled or torn in pieces, the spectators felt the presence of something more than mere mental honesty; they felt the presence of some new and unintelligible kind of pleasure, which, presumably, came from somewhere. It might be a strength of madness, or a lying spirit from Hell; but it was something quite positive and extraordinary; as positive as brandy and as extraordinaory as conjuring.

And it led to different effects.

The Pagan said to himself: "If Christianity makes a man happy while his legs are being eaten by a lion, might it not make me happy while my legs are still attached to me and walking down the street?"

Naturally the skeptic is as always not quite satisfied.

The Secularists laboriously explain that martyrdoms do not prove a faith to be true, as if anybody was ever such a fool as to suppose that they did. What they did prove, or, rather, strongly suggest, was that something had entered human psychology which was stronger than strong pain.

One conclusion, then, is to

strongly advice modern agitators, therefore, to give up this particular method: the method of making very big efforts to get a very small punishment.

Greenpeace and others may not quite take heed, still it is a rather good advice.

Of course, what Chesterton was writing about was womens' right to vote. In 1908 this was still a rather radical idea. Chesterton did not accept it, as his impression was that most women didn't want it. And he thought even less about the suffragettes' methods.

Still, it is hard to avoid the fact that the suffragettes won. Women now are as powerless as men when it comes to complaining about the government's decisions. They can't even excuse themselves with not having the right to vote. And as long as they don't sing in joy about it, nothing will change.

Next Saturday the topic is Charlatans and Quacks. In short counterknowledge.

For those interested, here is a link to an interesting debate on Victor Reppert's site, about an argument propagated by John Loftus (a former Christian and now one of the most active anti-Christian "debunkers" on the net) about the size of the universe as speaking against Christianity.

I mean the stuff e.g. Thomas Chalmers debugged in the early 1800's (A series of discourses on the Christian revelation viewed in connection with the modern astronomy (1817)) and C.S. Lewis about fifty years ago (The Discarded Image - An Introduction to Medieval and Renaissance Literature). Not really new arguments, nor very good. A bit telling to use them, one might say.

Still, evaluating such a debate is sometimes difficult. However, as John from time to time is building and strenghtening his case by myths, it is easy to conclude that science sometimes really is threatened by faith. In this case John's.

One particularly telling allegation from his side is that

Christianity slowed the progress of science down or tried to stop it dead in its tracks every single hard-earned step of the way.

The question then is how long Loftus's variant of atheism will slow the progress of the Historical Sciences.

Anyone interested might do worse than check this article on some aspects of it. Or, if you are Norwegian inclined, my two chapters in the book "Tro og vitenskap - Sammenheng eller Sammenstøt" ("Faith and Science - Connection or Conflict?".

As a mostly finished chapter on the size of the universe, the aliens debate and Christianity, was dropped from my recent book on Dawkins and the New Atheists (again in Norwegian, alas (especially for my bank account)), it may surface somewhere later this year.

Thanks to Bede who made me aware of an interesting blog concerned with myths, particularly political ones it seems.

And as the latest article praises Damian Thompson's latest book, Counterknowledge, and Michael Barkun's A Culture of Conspiracy: Apocalyptic Visions in Contemporary America, it is easy to recommend the site.

It is no downside that Kamm enjoys Chesterton.
Lagt inn av Bjørn Are kl. 14:22 3 kommentarer: