A song for the unsinging hero

Rather a great interview. Despite no tanks or ladies.
Lagt inn av Bjørn Are kl. 22:09 Ingen kommentarer:

A song for the unsung hero 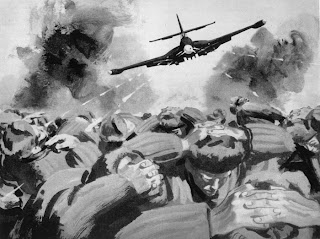 Everyone who knows anything about comics, are well aware of Milton Caniff, Alex Raymond, Hal Foster and the rest of the 30's grand pioneers of newspaper series.

While he drew comics for three brief years only, his groundbreaking work on aviation adventurer Scorchy Smith from December 1933 through November 1936 inspired everyone from Caniff to Pratt. 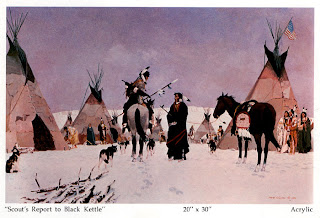 While the latter leaned heavily on two stripes from October 1936 in the opening of La Conga des bananes, the former was both a close friend and so impressed by Sickles talent that he had him in periods help him out on both Terry and Steve Canyon. 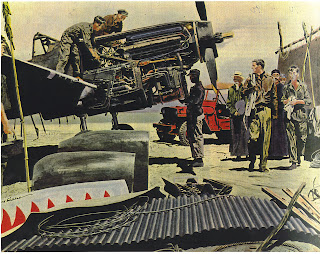 How he managed over a six month planned effort to revamp his predecessor John Terry's amateurishly drawn daily strip into a professional work of art, is one of the most impressive achievements in comics history. Without his readers or his editors really noticing, until it was too late.

Aside from the occasional lending hand (and a far later planned collaboration with Caniff on a Bruce Lee strip which never came to pass), Sickles left the cartoon industry in 1936 to do what he did best, draw men and machines in movement.

He illustrated more American military instruction manuals than anyone else, besides commercials and work for magazines like Reader's Digest , National Geographic and Life. He even illustrated One Day in the Life of Ivan Denisovich by Alexander Solzhenitsyn in the 1960's. 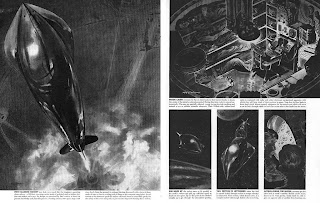 So enjoy the drawings in this blog article, whether it is from the Western Plains or the Asian war front. Not the mention the rocket race, here from an article in Life, January 17th 1949, on the first manned expedition to the moon twenty five years in the future. Firmly based on "present knowledge and plausible guesses".

And check out this book which is really what I am reviewing here after having more than voluntarily bought my own copy, 400 pages of pure delight.

A heartfelt praise or three to IDW's Library of American Comics for making this wonderous volume available! Inside you'll find both Sickles' complete 900-strip work on Scorchy Smith , the Bruce Lee strips and his extensive work for the military and the magazines. Besides the comics, there are 140 pages of drawings, including those he made for stories by Hemingway, Michener, Solzhenitsyn and Faulkner.

Few illustrated works have a higher wow-factor. Or a surer hand in making both thoroughly realistic drawings and highly romantic.

No one could teach you better how to disarm a German tank. And few a lady.
Lagt inn av Bjørn Are kl. 22:57 Ingen kommentarer:

From Russia with slides

Check out these from Tony.

No brain no pain

Responses to quotes that boldly frequent the net often do tell more about those responding than about the quote.

One item under present study is Chesterton's If there were no God, there would be no atheists.

Some applaud heartily and smile (or frown, depending on disposition) when considering the foolish atheists who don't see the light. Obviously, without God there would be no atheists, as there would be no intelligent creatures or even a universe.

Others protest sternly. Indignation run rampant. It is dishonest and antilogical as always when someone attempts to prove God. In short, Chesterton, the perhaps not so good man after all, disappoints as he is begging the question. It is like proving Russell's celestial teapot by saying that if there were no Celestial Teapot, there would be no deniers of a Celestial Teapot.

As most people are vigorous when on the net, noone does so cowardly and time consuming thing as reading the context.

We are not so brave. Here it is:

"We have had during the last few centuries a series of extremely simple religions; each indeed trying to be more simple than the last. And the manifest mark of all these simplifications was, not only that they were finally sterile, but that they were very rapidly stale. A man had said the last word about them when he had said the first. Atheism is, I suppose, the supreme example of a simple faith. The man says there is no God; if he really says it in his heart, he is a certain sort of man so designated in Scripture. But, anyhow, when he has said it, he has said it; and there seems to be no more to be said. The conversation seems likely to languish. The truth is that the atmosphere of excitement, by which the atheist lived, was an atmosphere of thrilled and shuddering theism, and not of atheism at all; it was an atmosphere of defiance and not of denial. Irreverence is a very servile parasite of reverence; and has starved with its starving lord. After this first fuss about the merely aesthetic effect of blasphemy, the whole thing vanishes into its own void. If there were no God, there would be no atheists. It is easy to say this of the nineteenth century negation, for that sort of atheism is already one of the dead heresies. But what is not always noticed is that all the more modern forms of theism have the same blank. Theism is as negative as atheism. To say with the optimists that God is good, and therefore everything is good; or with the universalists that God is Love, and therefore everything is love; or with the Christian Scientists that God is Spirit, and therefore everything is Spirit; or, for that matter, with the pessimists that God is cruel, and therefore everything is a beastly shame; to say any of these things is to make a remark to which it is difficult to make any reply, except “Oh;” or possibly, in a rather feeble fashion, “Well, well.” The statement is certainly, in one sense, very complete; possibly a little too complete; and we find ourselves wishing it were a little more complex. And that is exactly the point. It is not complex enough to be a living organism. It has no vitality because it has no variety of function."
- Where All Roads Lead (1922)

What GKC is observing is his day's atheists, as protesters, whether one felt they protested too much or not. He had met more than his share of New Atheists.

Chesterton is really saying that if none believed in God, there would be no need to protest against theists. If Nietszhe had succeeded in killing God, he would at the same time have killed all atheists.

Quote mining is dangerous business with pitfalls, fall ins and stumbling tunnel visions. Taking words out of context may be a merry sport, however sometimes the anti-dupe committee does have to step in.

When reading Chesterton, it is mandatory, not to mention more manly, to find the form. Chesterton does not proclaim. He argues. He looks at things from different angles and positions, whether right, left or upside down. He associates and teases. And then he sums up a paragraph or two in a sentence that hits like lightning. And magically, like a turnip turning into a wagon, it becomes A Quote.

On its own The Quote may sound like nonsense or fallacy. In context it is far more often than not both true and philosophical profound.

That is why he in the same paragraph also concludes that Theism is as negative as atheism, a verse rareley quoted in church.

There is in short only one true and profound way to conclude. Like Zeus we throw a lightning bolt with lethal precision.

If there were no context, there would be no quotes.
Lagt inn av Bjørn Are kl. 15:55 2 kommentarer:

They're all here, Eddie Jobson, Marc Bonilla and Keith Emerson (on harmonica) - performing for 200 000 people in part two of the Grand Finale (part one is no longer available - so do hurry).

Great to see that Marc has such a prominent role.

This has to be released on DVD.

The Clueless losing out?

Such a critic makes one almost believe in the human race (which you sometimes must).
Lagt inn av Bjørn Are kl. 12:48 Ingen kommentarer: