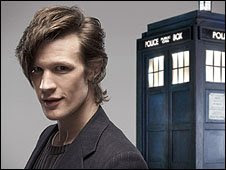 And then it is clear. You'd have to travel in time to have expected that one.

Say hello to Matt Smith. And mix it with a farewell here.
Lagt inn av Bjørn Are kl. 23:53 Ingen kommentarer: 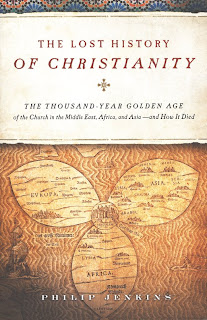 One of my Fav Historians, Philip Jenkins of Hidden Gospels: How the Search for Jesus Lost Its Way fame, has just written an article (and a book) on the Church in the Middle East, Africa and Asia.

Across much of the Middle East, the ancient Christian story seems to be coming to a bloody end almost before our eyes. The most dramatic catastrophe in recent years has been that of Iraq's Christians, who represented 5-6 percent of Iraq's population in 1970. That number is now below 1 percent, and shrinking fast in the face of persecution and ethnic/religious cleansing.

Western Christians watch this story in horror, but few claim detailed knowledge of the situation, or can easily recognize the Iraqi churches we read of in the news. Are they perhaps the survivors of some Victorian missionary enterprise? we wonder.

Actually, understanding the history of Iraq's churches should make us still more keenly aware of the tragedy we see unfolding. Not only are these churches — Chaldean, Assyrian, Orthodox — truly ancient, they are survivals from the earliest history of the church. For centuries indeed, the land long known as Mesopotamia had a solid claim to rank as the center of the church and an astonishing record of missions and evangelism. What we see today in Iraq is not just the death of a church, but also the end of one of the most awe-inspiring phases of Christian history.

Be sure to catch Jenkins' book The Lost History of Christianity: The Thousand-Year Golden Age of the Church in the Middle East, Africa, and Asia — and How It Died.
Lagt inn av Bjørn Are kl. 17:37 1 kommentar: 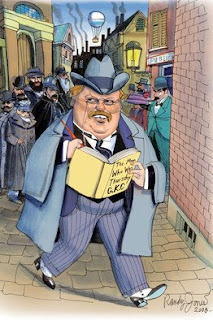 For a writer whose first two books were published 100 years ago, G.K. Chesterton is looking pretty contemporary. During his run for the Republican presidential nomination, Mike Huckabee quoted freely from Chesterton. On the Democratic side, numerous Obama supporters claim to see the influence of Chesterton's thought on the president-elect's worldview.

Wick Allison, former publisher of National Review (and current editor-in-chief of D Magazine) sees no contradiction in Chesterton's attraction for both the right and left. "I think both sides could benefit from reading Chesterton. I certainly see a conservative side to Obama that connects to what Chesterton said of tradition, that it represents 'the democracy of the dead.'"